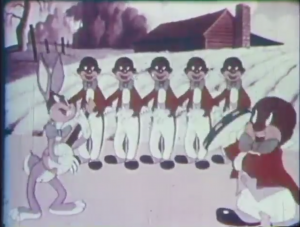 The Bugs Bunny Dixie cartoon within Ethnic Notions really struck me because of its relevancy to today’s pop culture. Many of my friends and I grew up watching the Looney Tunes revival show on Cartoon Network. I was shocked that the show had such a dark past with racial stereotypes in America. Seeing Bugs Bunny singing Dixie with black caricatures was very uncomfortable as I have a close connection to the show. How are racial stereotypes perpetuated in seemingly innocent media today?