Progress Within a Struggle 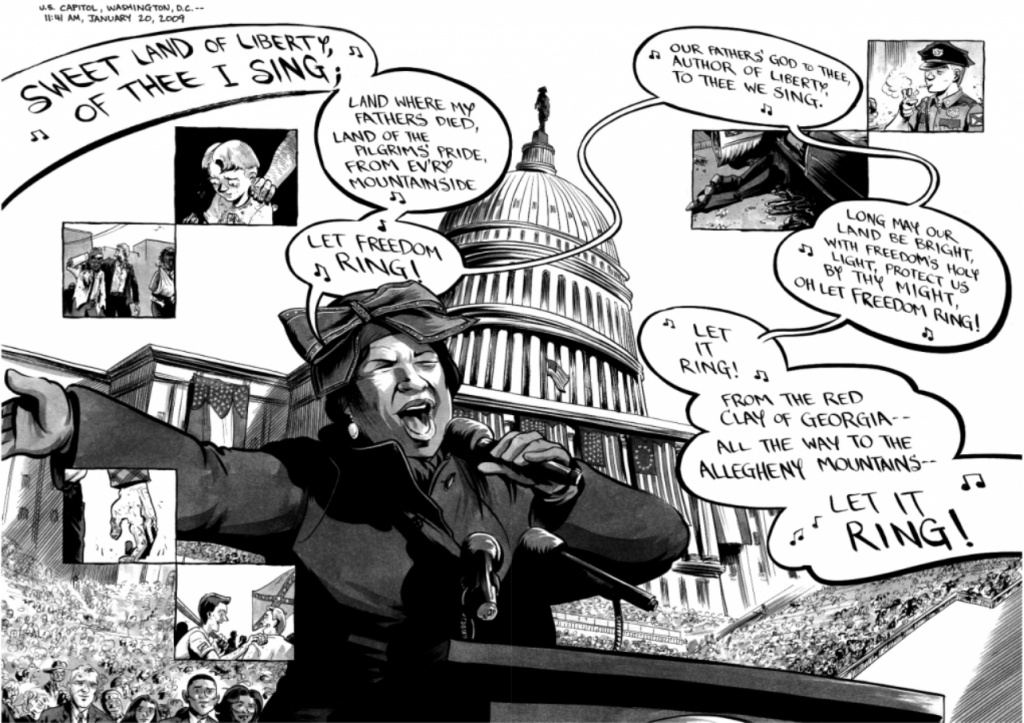 This spread from March 2 by John Lewis, Andrew Ayden, and Nate Powell emphasizes the relationship between a horrific past and a hopeful future.  John Lewis and many others peacefully protested in the face of great violence. With their suffering and sacrifice, they forged a better future.  Images of the aftermath of racially motivated mob violence overlay the message of freedom that Aretha Franklin belted at Obama’s inauguration. The uncomfortable contrast between the gory aftermath and Aretha’s altruistic words moved something in me.  The shining principle of freedom is built on blood. Through suffering and conviction, civil rights activists claimed freedom. But the panels from the past do not focus on the protestors; they focus on the aggressors. Do these people have a place in the future that is depicted behind them?  The most striking image is that of a young white boy staring at the blood on his hands in confused horror. Just a few pages before, the same boy joyfully clobbers an African American protestor. Only after the violence stops does he realize the impact of his place within it. The blood on his hands stains him just as the prejudices of his parents do.  He forfeited his future for his parents’ pasts. Surely he has no place in the future depicted. Does the remorse in his eyes mean anything? Dr. Wills claimed that if something is repeated to you throughout your childhood, it is ingrained within your marrow. Racism has been recurrent throughout America’s history. It has been ingrained within our society’s infrastructure.  The scene of Obama’s inauguration does not represent a perfect future; it represents progress within a struggle. The same struggle that John Lewis and the Freedom Riders faced when stepping off a bus in Montgomery, Alabama.