Revolution — a radical shift from one system to another motivated by the desire for better conditions or enhanced understanding. Revolutions can be violent or nonviolent but must cause change.

Revolution can be politically motivated. John Locke and Karl Marx both penned revolutionary, completely opposing ideas.  The idea of private property motivated violent radical change from monarchy to democratic republic in America and radical shift in power in the UK from the monarchy to parliament.  Marx’s communism brought violent radical change to Russia, Vietnam, and China. In Lapham’s, Yasmine el Rashidi claims that the anger of the Egyptian people at their president sparked revolution in  2011. Political revolutions tend to be violent and result in a change in government.

Revolution can be scientifically motivated. Scientists such as Copernicus, Galileo, and Einstein challenged widely held belief in the search for the truth.  Copernicus’s heliocentric universe started a completely new field of science and made people more distrustful of the Catholic Church. Scientific revolutions tend to cause completely new thought processes. 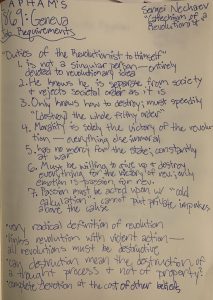 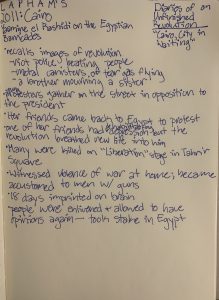 Revolution can be eugenically motivated.  The Hutus killed the Tutsis based on the belief that Hutu blood was superior and built a whole government around this belief.  There was definitely a radical change but no desire for better conditions as a whole. The Hutus killed for what they believed was their own betterment. Passionate but calculated killing just as Sergei Nechaev detailed in his “Catechism of a Revolutionist.” Eugenic revolutions go beyond a violent tendency; they are inherently violent.