Humanities — the study or account of human experience. The Humanities document and record humanity in its many iterations. 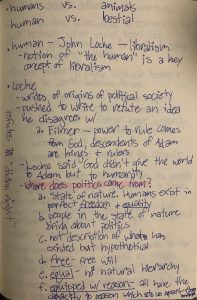 Notes on Locke from one of Professor Quillen’s Lectures

humanities — traits that set humans apart from animals. Qualities that all humans possess that make them inherently and undeniably human. Experiences that mark different subsets of humans but still acknowledge them as part of humanity as a whole. Used historically to create dominance.

John Locke claims that humanity stems from the ability to reason and exist within the states of freedom and equality. While the ability to reason is a human quality, I would not say it separates humans from animals.  Animals too have reason at its very base — the capacity to base future decisions off of past occurrences. Reason also provides a gray area in that not everyone reasons in the same way. Perhaps this can fit under the subset of experience. How you interpret the world around you is very much based off of what society you were raised in. The nuances of reason may be enough to distinguish the differences between humans but not unite them as one race apart from animals. Merely existing in freedom and equality does not constitute a human. Humans have the ability to aspire to these states and live up to other values, but these values can also lead to negative change. Humans like animals can enact violence out of necessity, but unlike animals also enact violence out of emotion or belief.  A lion kills a gazelle because it needs to eat. A Hutu kills a Tutsi because they believe in their superiority. A belief that was cultivated by their human aspiration to something greater. Humans do not just accept the world as it is but question why. This quality has led to many conceptual schemes such as rationalism, pragmatism, and the Copernican theory, and the Theory of Relativity. Humans not only observe the world but have the desire to explain it and change it. This has led to the struggle to expand the definition of human. Seventy years ago being human in America meant being white, but the Civil Rights Movement worked to change this definition. Struggles such as this occur all over the world in different forms. Humanity strives not only for productive well-being but social well-being.